Important notes about anti-corona-measures in the Rommel

The structure of the Rommelwood Association 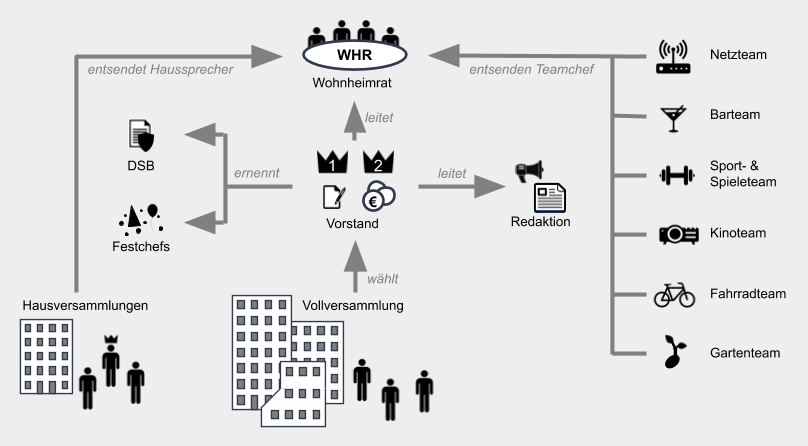 Description of the entities

… is responsible for the following tasks

The General Assembly is held at least once a year, usually in one of the common rooms. All members of the Association can participate.

“Discharge of the Board” means that the members of the Association officially agree to the actions of the Board in the past financial year so that the Board can no longer be held accountable in case any mistakes, e.g. in accounting, should be discovered retroactively.

The current house spokespersons are:

The commitee consits of the following persons:

These were elected by the members of the association at the last ordinary general meeting. The term of office is one (business) year. A new board is then elected, whereby of course the same persons can also be re-elected.

Of course, every member of the board has a seat on the dormitory council.

The departments and their spokespersons

A team is nothing more than a community of interests of association members. The members of these interest groups elect a spokesperson for their team from among their own ranks. This gives the speaker a seat on the dormitory council. Currently there are six departments in our association: To learn more about the individual teams please use their own information offer on our homepage.

The Council of the Dormitory

The dormitory council consists of a total of 19 people: Four board members, 10 house spokespersons and six team spokespersons. The Council meets at least once per semester. Depending on the topics addressed, e.g. the caretakers or data protection commissioner can also be invited - as an expert so to speak.

You can find out more about this in the articles of association or by reading the minutes of the last meeting. This will appear on the notice board of each house no later than two weeks after the meeting.